Please select your country and language for a tailored experience.

In the beginning Rochas was Mr Marcel Rochas. “Every current event is an excuse for me to create,” he once said. The woman, the era, the intuition… were all just right. An eye kept on a fast-changing world to accelerate the movement. This was the almost obsessional quest of the man who freed fashion from convention in the early 20th century, transforming it into a lesson in radiance and beauty for the next 30 years.

At the age of only 23, Marcel Rochas opened his couture house on Place Beauvau in Paris in 1925, before moving to Rue Matignon in 1931. The couturier brought the fresh breath of youth to haute couture. He built the wardrobe of the emancipated Parisian woman in the post-war years, whilst also creating perfumes that reflected a love affair with elegance and freedom.

Style or nothing! What matters is cutting a fine figure, the famous beautiful drape of the clothes. Rochas invented the basque, designed the mermaid evening gown, liberated women’s bodies with his ¾ coats and square shoulders, and created the Bird dress inspired by the artists of his day. Timeless classics that the couturier reinvented for every season.

Always a pioneer, Marcel Rochas democratised fashion by offered haute couture at affordable prices. An overnight success. Women flocked to buy clothes from the man whose slogan was “‘elegance, simplicity and youth”.

When Marcel Rochas met his future wife and muse, Hélène, on the Paris Métro, it was love at first sight. A passion that never left him and inspired a new language of the female body, beautified instead of dramatised. The Femme perfume would be one of his greatest declarations of love.

Elegance, taste, celebration: after the Liberation, Paris became a city of pleasure once again. Hélène and Marcel Rochas were at every society function. Madame wore her husband’s finest creations, many of them created on and for her. The couple dazzled at the Nuit de Pré-Catelan masked ball (1946) where Hélène appeared with an extravagant black mask in the shape of a bat; they attended Maurice de Rothschild’s ball inspired by fairy tale characters (1948) and the Bal des Oiseaux (the Bird Ball) given by the Princesse de Polignac at the Palais Rose de Boni de Castellane (1949). 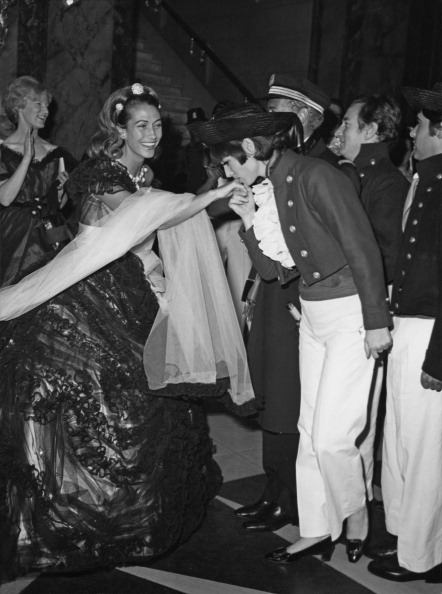 For the launch of Femme (1943), Marcel Rochas organised an exhibition “Les Parfums à travers la Mode 1765-1945” (Perfumes in fashion) in his own salons as a tribute to the couturier Paul Poiret. The Moustache (1949) perfume for men and the first complete range of products for men also gave rise to a legendary party where the men wore moustaches and women wore mouches, fake beauty marks, and an exhibition “Portraits d’hommes du xvie siècle à nos jours” (Portaits of men from the 16th century to today). When Hélène Rochas took over the firm, she continued the tradition of putting on cultural events, organising the My Fair Lady Ball at the Grande Cascade du Bois de Boulogne (1965) and the Monte-Carlo Centenary Ball (1966) at the request of Prince Rainier III. 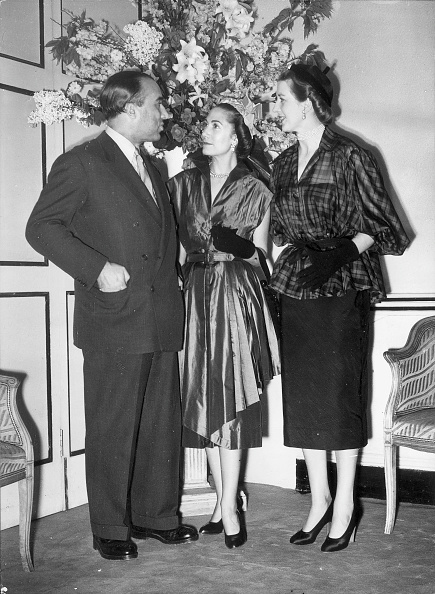 On a yacht in Monte-Carlo, at the Hôtel de Paris in Monaco, on the Heights of Cannes or the fishing port at Saint-Tropez, and not forgetting Portofino, the Rochas made the Côte d’Azur their favourite family stamping ground. 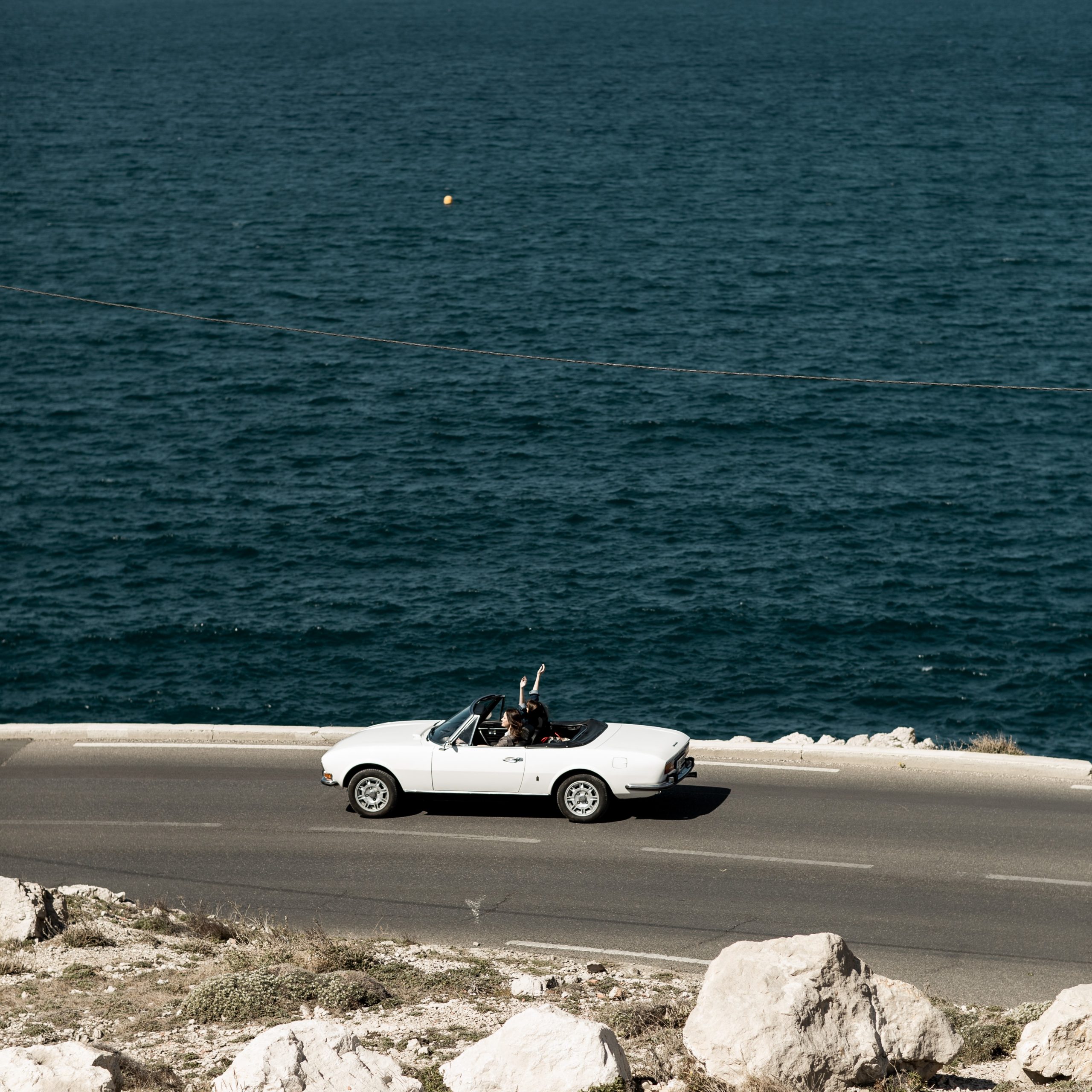 A few years later, it was in Roquebrune-Cap-Martin that Hélène Rochas finally laid down her hat, building a holiday villa among the trees where stone sculptures rubbed shoulders with sharply pruned box bushes. A peaceful haven among stunning landscapes, which inspired the Eau de Rochas collection of perfumes (1970). 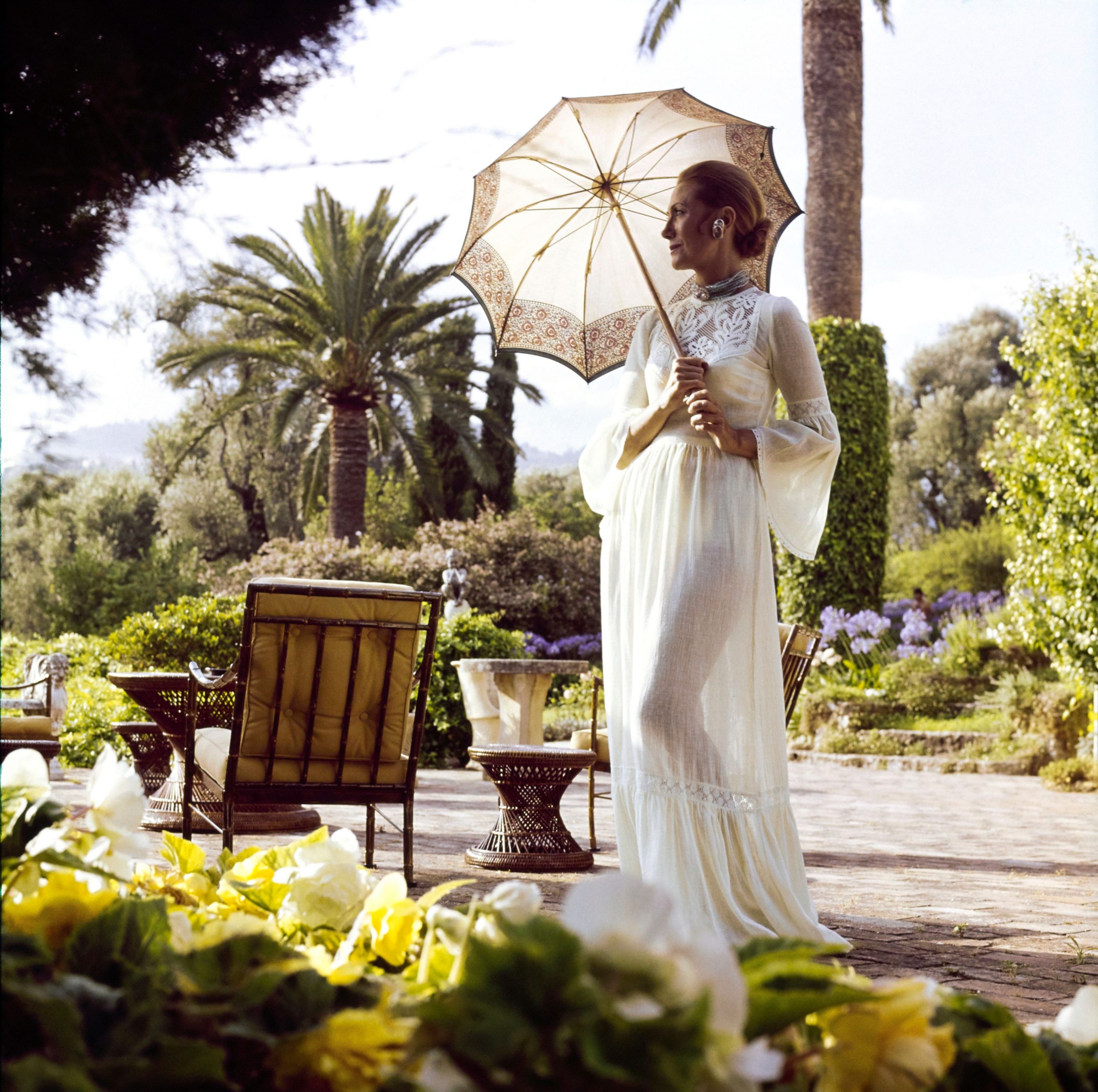 The Côte d’Azur also inspired many of Marcel Rochas haute couture creations: his beach pyjamas became the new trouser suit in the swanky seaside resorts, a symbol of female emancipation, elegance and sheer comfort. The Les Deux Lignes collection was made up of a line for the daytime with jersey pieces inspired by sportswear and a sophisticated line for the evenings with more couture pieces including dresses, coats and furs. 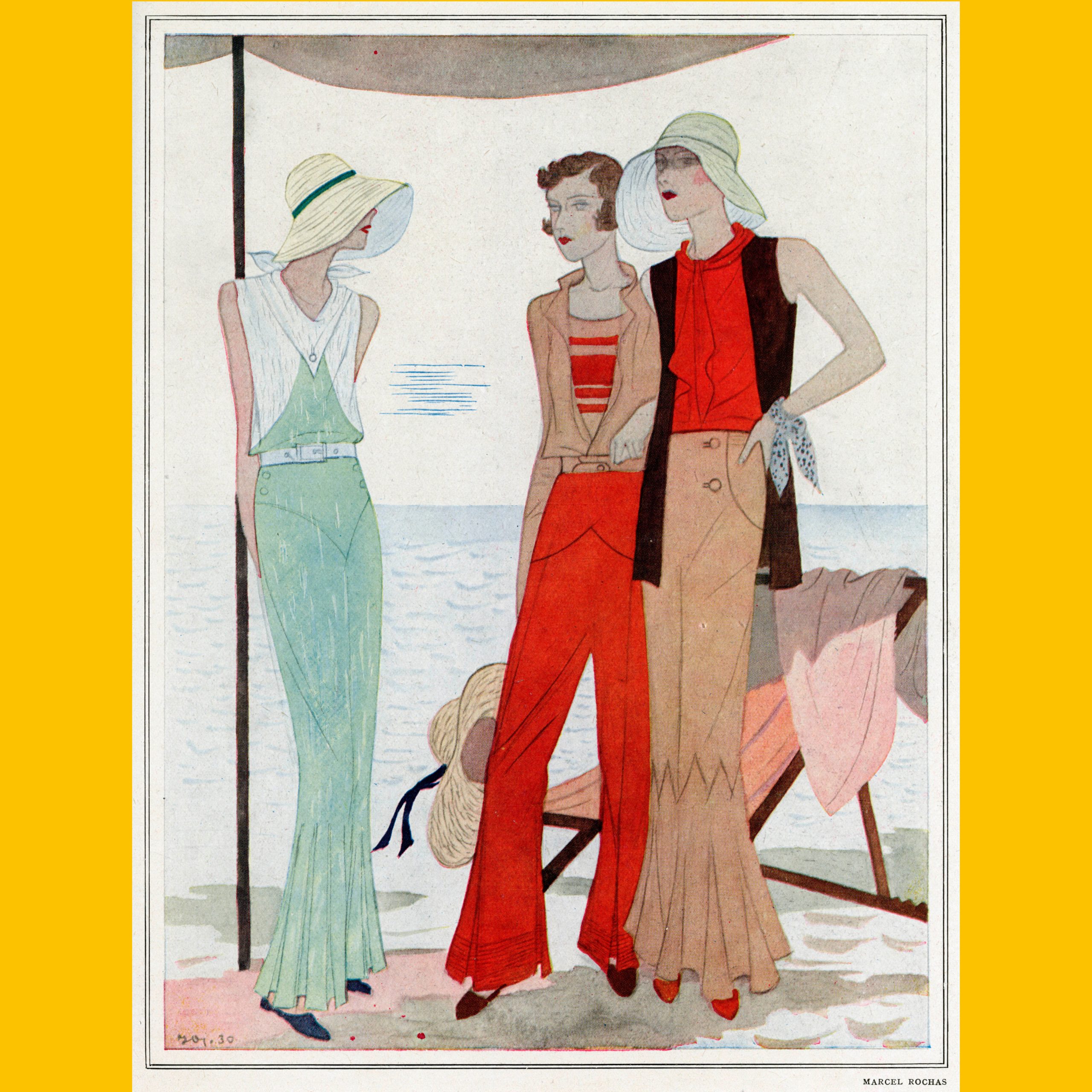 NATURE ACCORDING TO ROCHAS

With Rochas, nature is synonymous with French-style gardens, eternal springs, freshness and innocence. Never dry, these gardens are constantly irrigated by the water of dreams and lit by the sun of the imagination. Rochas’ birds and flowers are regularly revisited in the ready-to-wear creations and perfumes. They are part of the natural lifeblood of Rochas, a constant presence thronging with a multitude of colours and a very Parisian spirit. 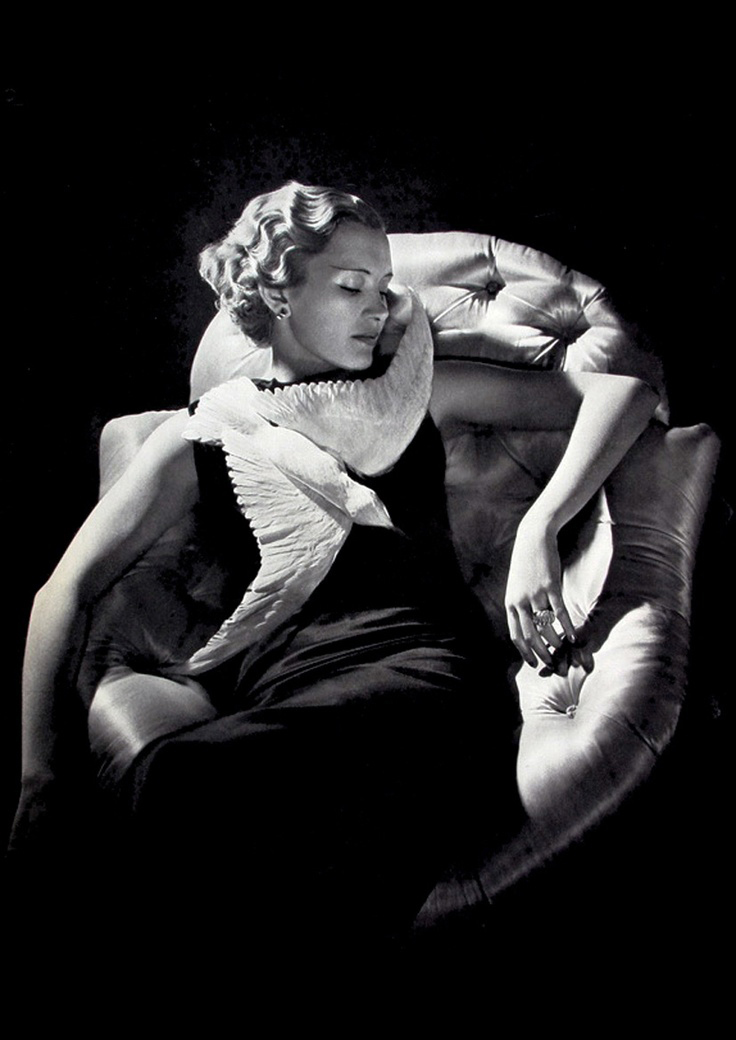 Water, a theme dear to Hélène Rochas, is to this day still inspiring the mythical Eau de Rochas and its newer versions. Maison Rochas continues the odyssey, with a recent addition to its collection – Girl, the brand’s first vegan perfume, made from 90% natural ingredients. 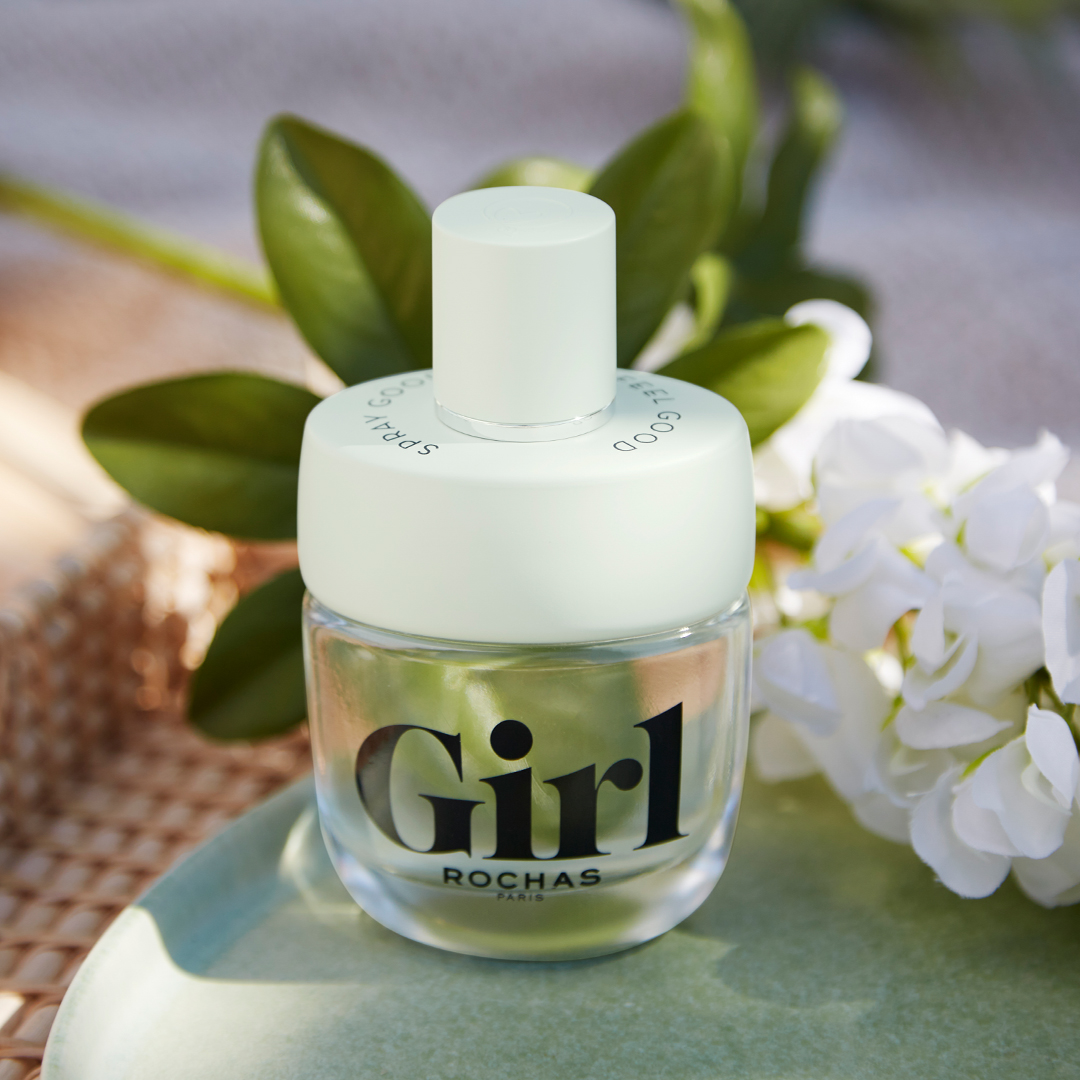 A SCENT OF SUCCESS —

A SCENT OF SUCCESS

Elegance tinted with boldness, youth and modernity has peppered the history of Rochas perfumes for over 80 years. Flashback to the key moments. 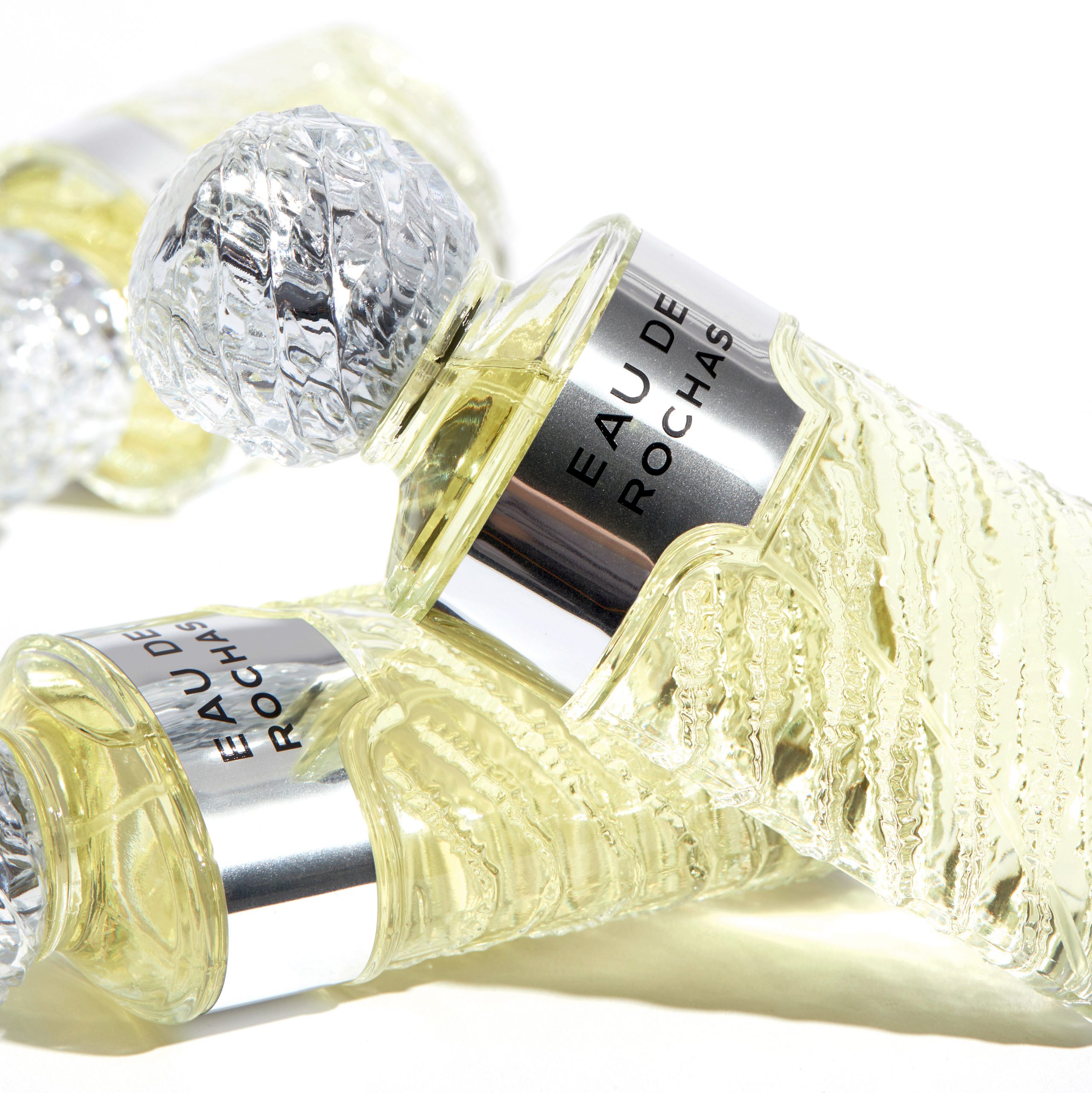 Marcel Rochas launched his first three perfumes whose names say it all about his philosophy: Audace, Air Jeune and Avenue Matignon. They were presented in an elegant rectangular opaline glass bottle with a navy band which was to become one of the symbols of the Maison. The perfumes were distributed exclusively through the Paris boutique at 12, avenue Matignon before being withdrawn at the beginning of the war. 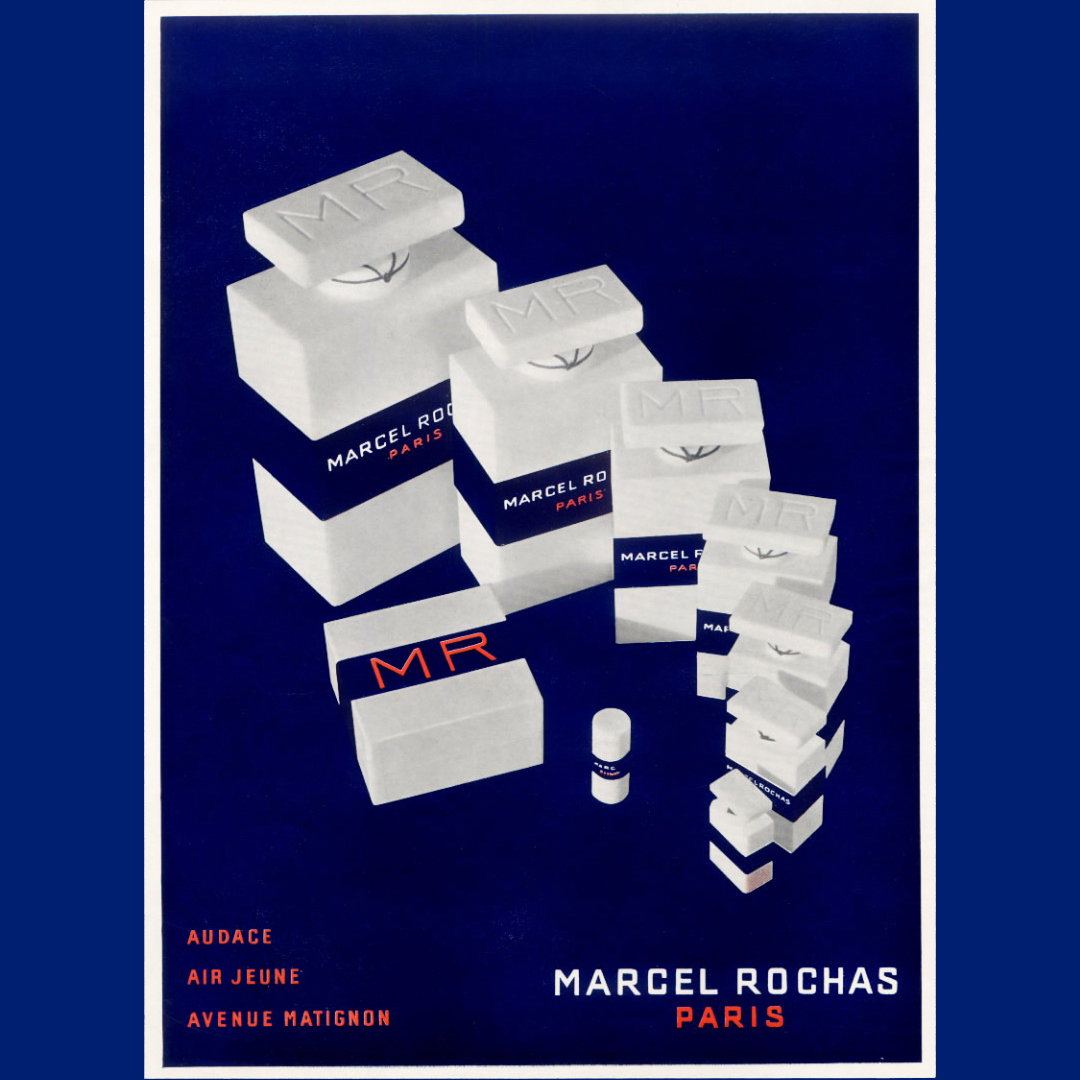 Marcel and Hélène. A story packed full of creations, travel, success and parties, but also, and above all else, love. Inspired by the woman he was madly in love with, Marcel Rochas created a fragrance that embodied the essence of their passion. The original version came in an amphora-shaped bottle inspired by the silhouette of actress Mae West. The box was light satin delicately covered in black and white Chantilly lace. Viewed as a masterpiece of perfumery, the luxury crystal bottle was signed René and Marc Lalique. 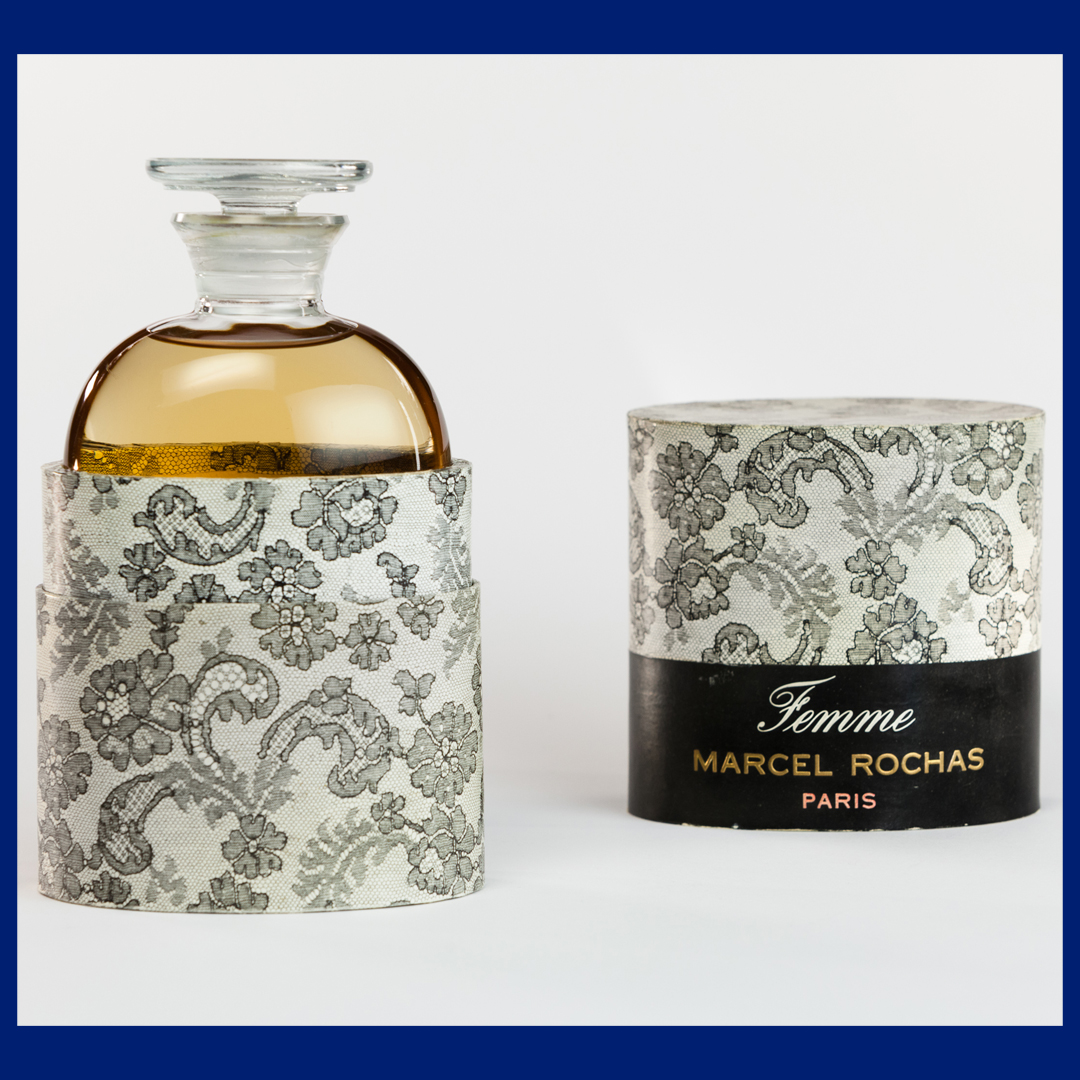 Madame Rochas is the symbol of a generation of emancipated women, masters of their own destinies, like Hélène Rochas. The woman dubbed “La Belle Hélène” was Marcel Rochas’ muse, but she was never in the shadows. The bottle is a Baccarat crystal replica of a janusette, an 18th century salt jar that Hélène Rochas picked up in Parisian antique shop. This was the perfume that propelled the company to number 1 status in the luxury perfume world in 1967. 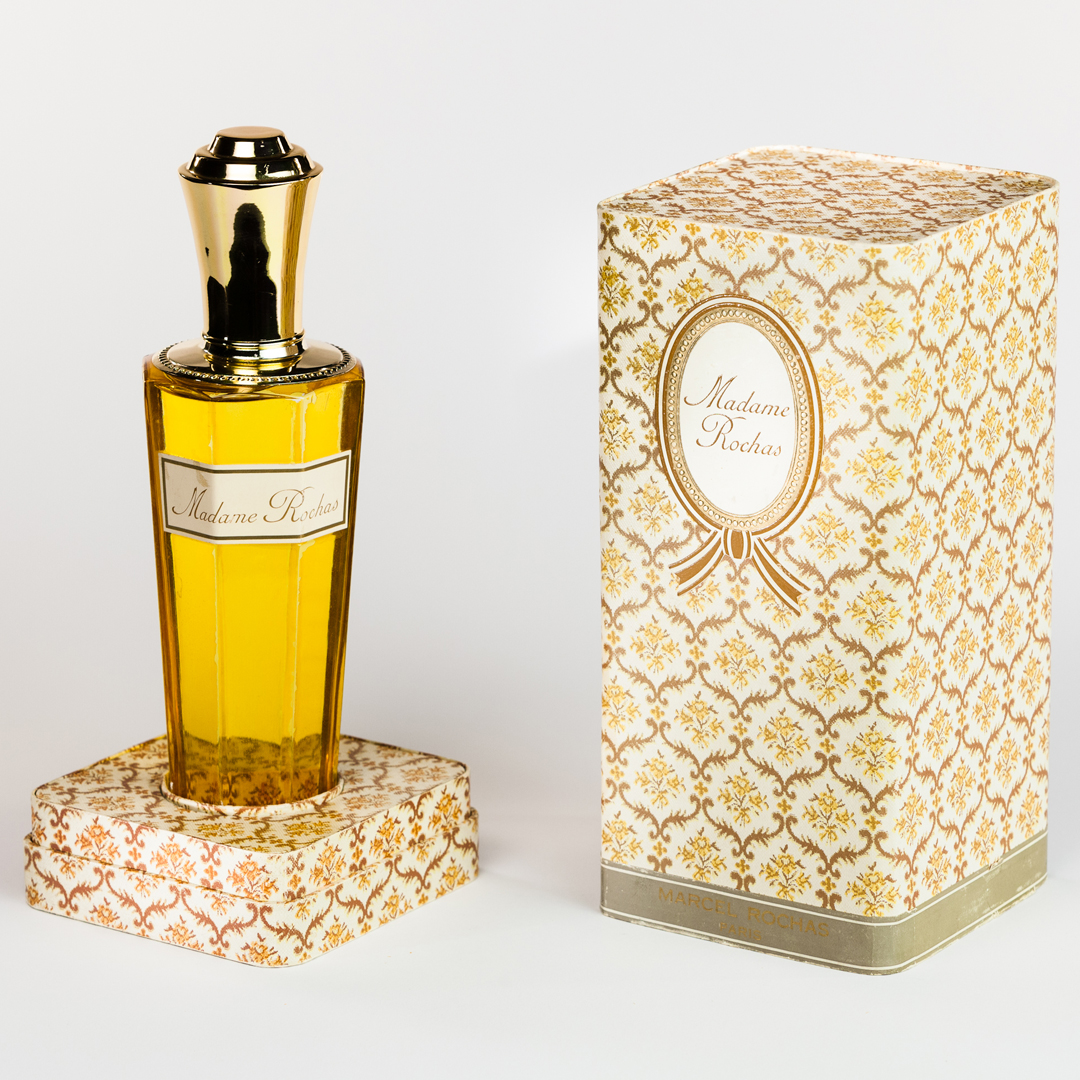 Eau de Rochas represents the very essence of innovation in the perfume world. “This was the first Eau de Cologne specifically for women”. It was as if Hélène Rochas, with extraordinary intuition, had discovered a magic formula guaranteeing everlasting femininity. A spring water with purity and radiance that burst forth like a wind of freedom blowing through its era. A mythical juice whose sales have topped 55 million bottles since its debut, keeping it on the list of the ten top-selling perfumes for four decades.

The name alone is enough to take you on a journey to far-away places that promise luxury and pleasure. Byzance corresponds to the whimsical, solar side of exceptional women with its enchanting fragrance. A world of wealth and mystery that also recalls the sumptuous Parisian parties Hélène and Marcel Rochas used to organise. A myth revisited in 2019 through a modern fairy tale transposed to Paris. A perfume whose extreme femininity is deployed through a lavishly floral heart. 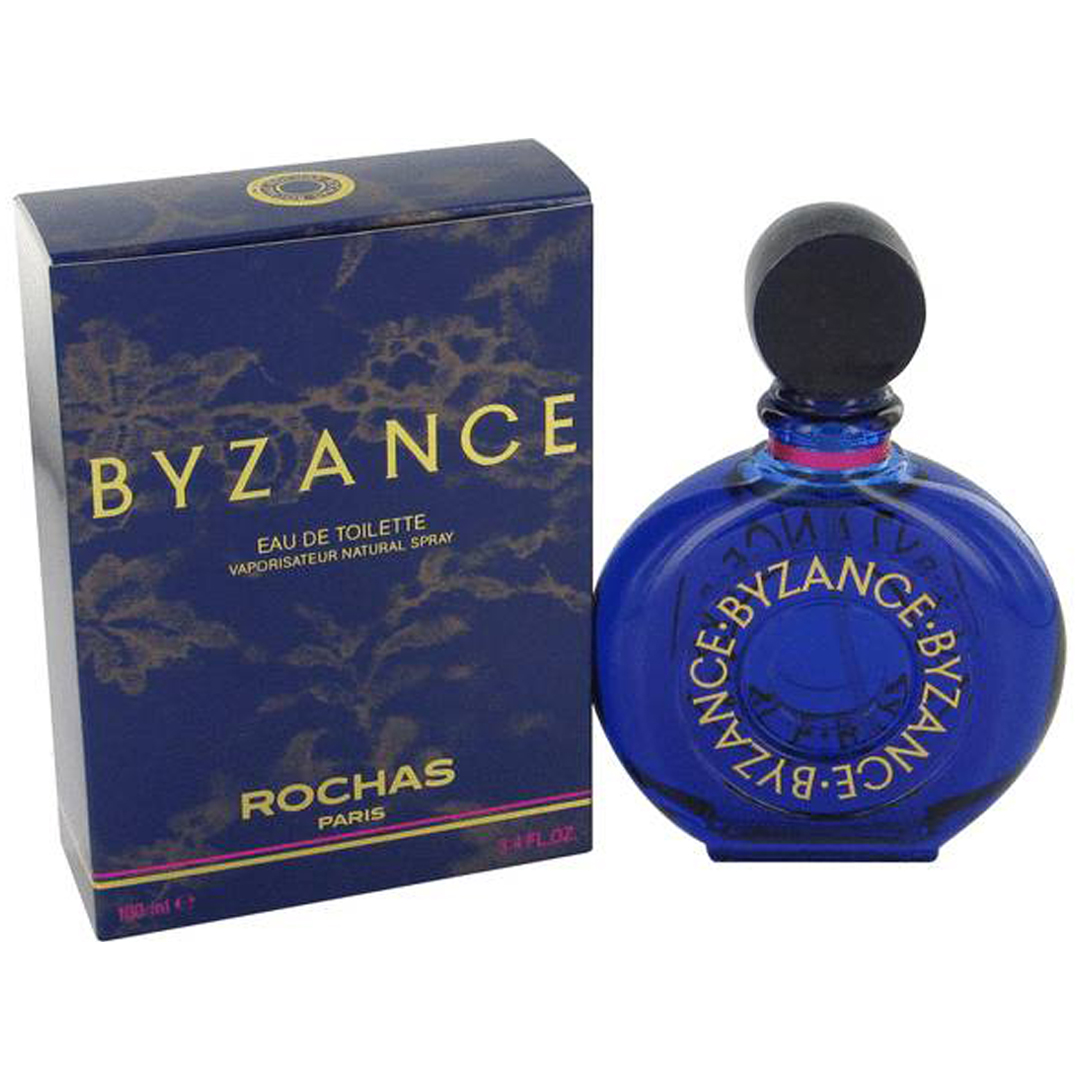 The essence of the bold, free modern woman. A manifesto. That of a new generation for whom every new creation is inspired by elegance, youth and freedom. In the wake of Marcel Rochas, who provided the backdrop for his times for 30 years, Rochas continues its love affair with women to create, shape and build today’s modernity. 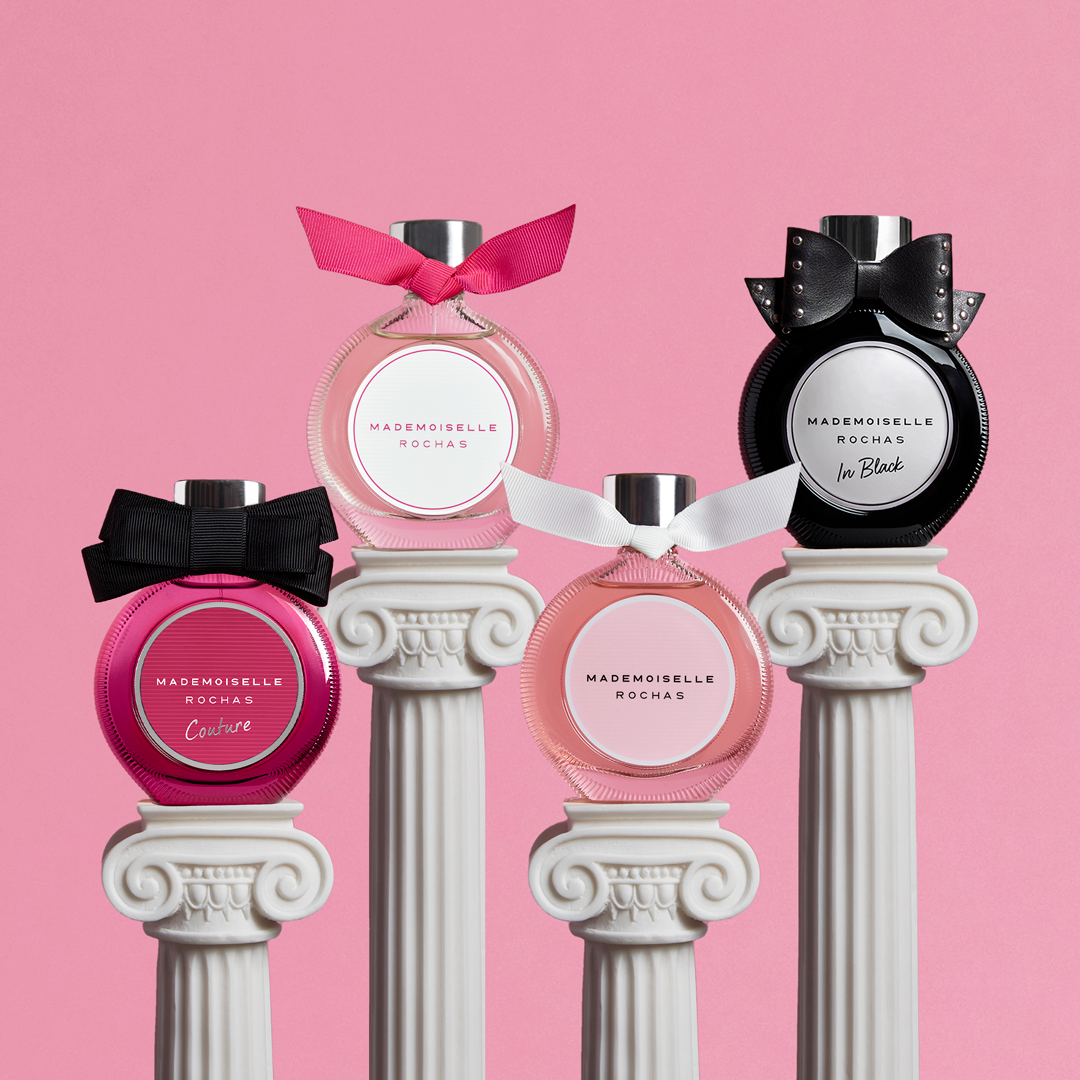 With natural elegance and distinguished nonchalance, L’Homme Rochas embodies the different facets of modern masculinity. An optimistic aesthete, a charmer, a sharp wit, with a strength that is other side of a coin it shares with remarkable sensibility. 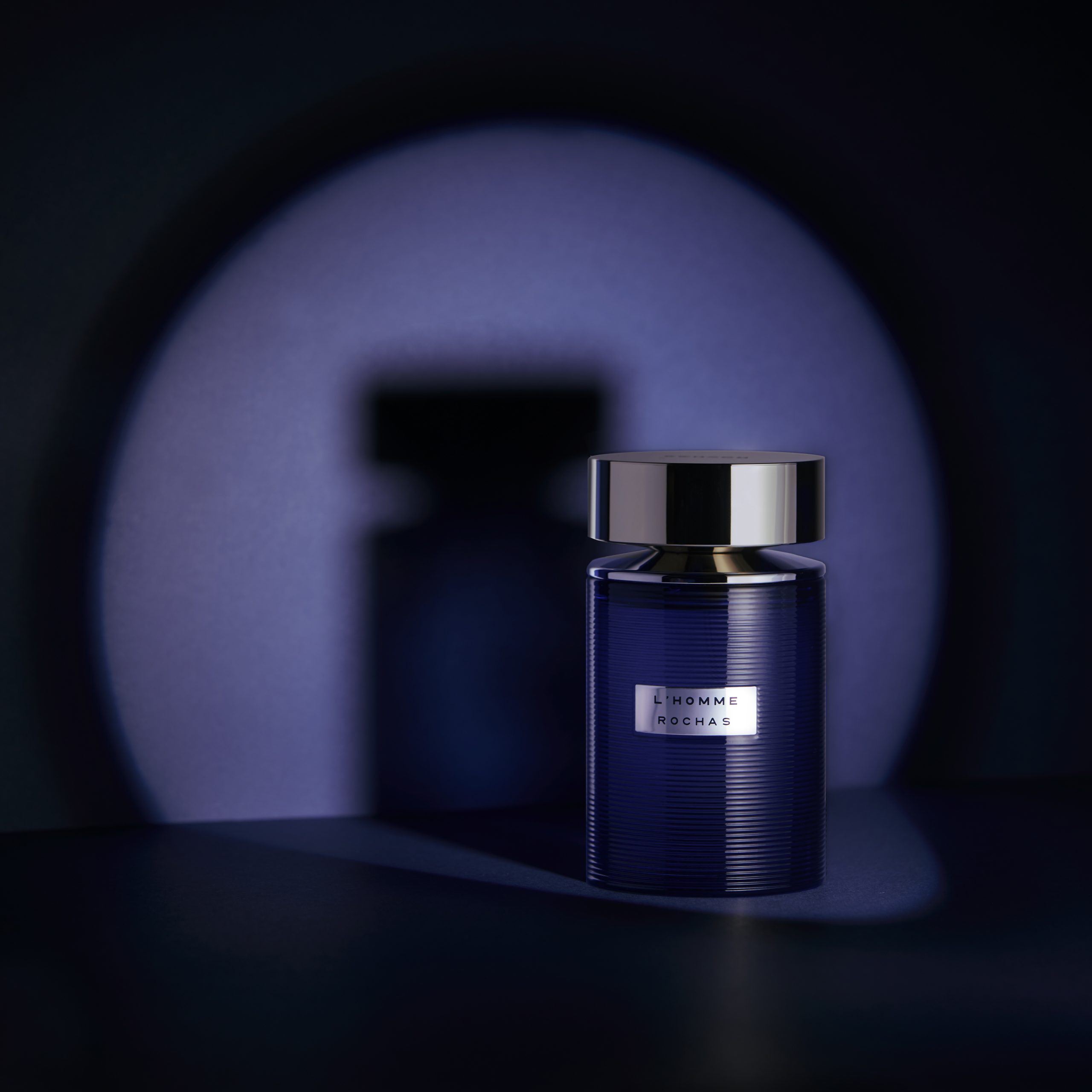 A perfume to feel good: Girl breaks the mould and celebrates nature and character. The first Rochas fragrance designed with environmental responsibility in mind, Girl is a manifesto for well-being and liberating femininity. Spray Good, Feel Good. 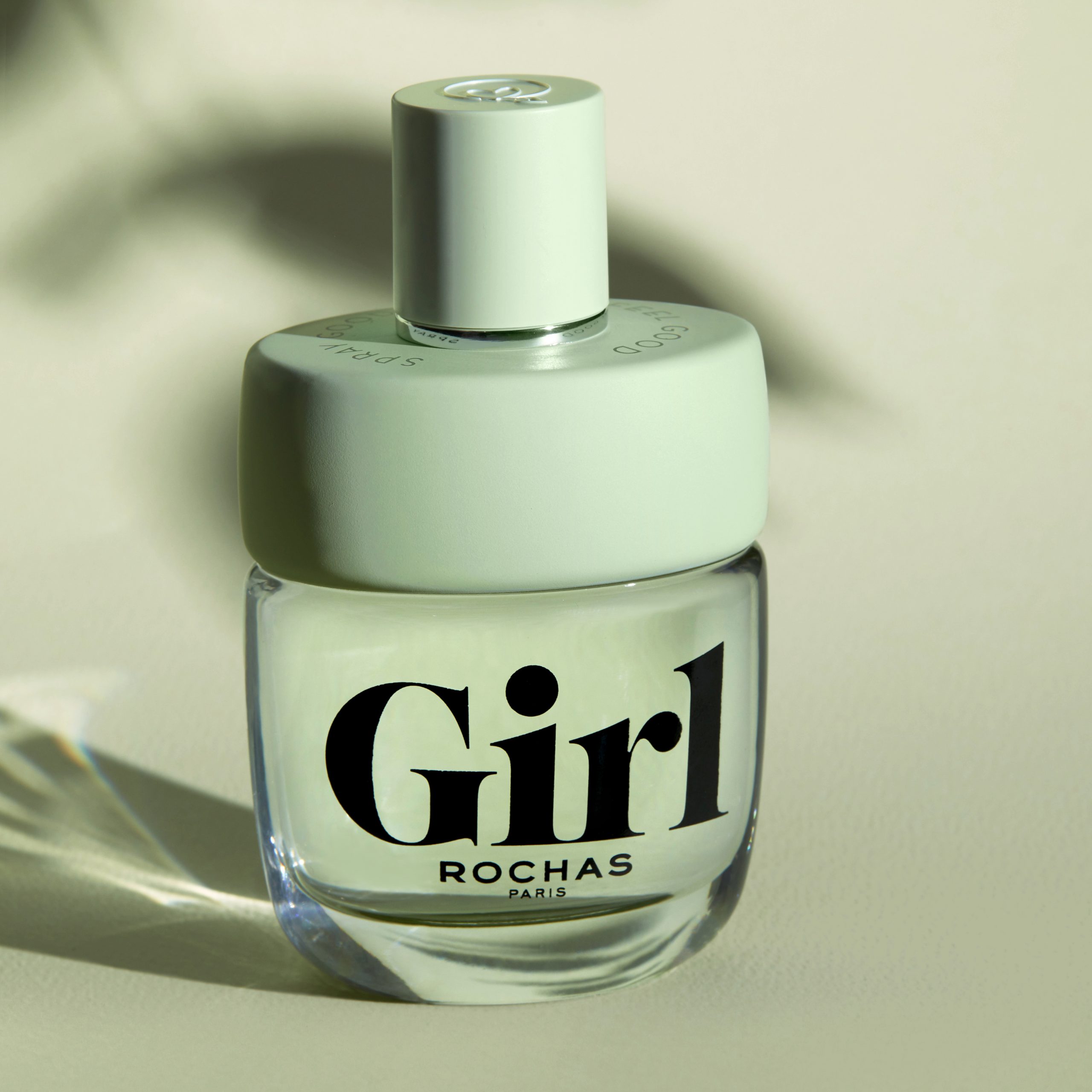 By inviting art into haute couture, Marcel Rochas became one of the first couturiers to initiate a true dialogue with the artists he admired. The Art Déco-inspired boutique at no. 12, Avenue Matignon was decorated in a bold modern style in navy blue and white with huge mirrors. The Bird dress (1934), a long black sheath dress with a huge white seagull at the neckline, remains one of the couturier’s finest tributes to the Surrealist works of Picasso and Matisse. The first perfumes became works of art. Inventing shapes, playing with the possibilities offered by glass, imagining different forms of cap for the bottles: the objects that contained the perfumes became masterpieces themselves. 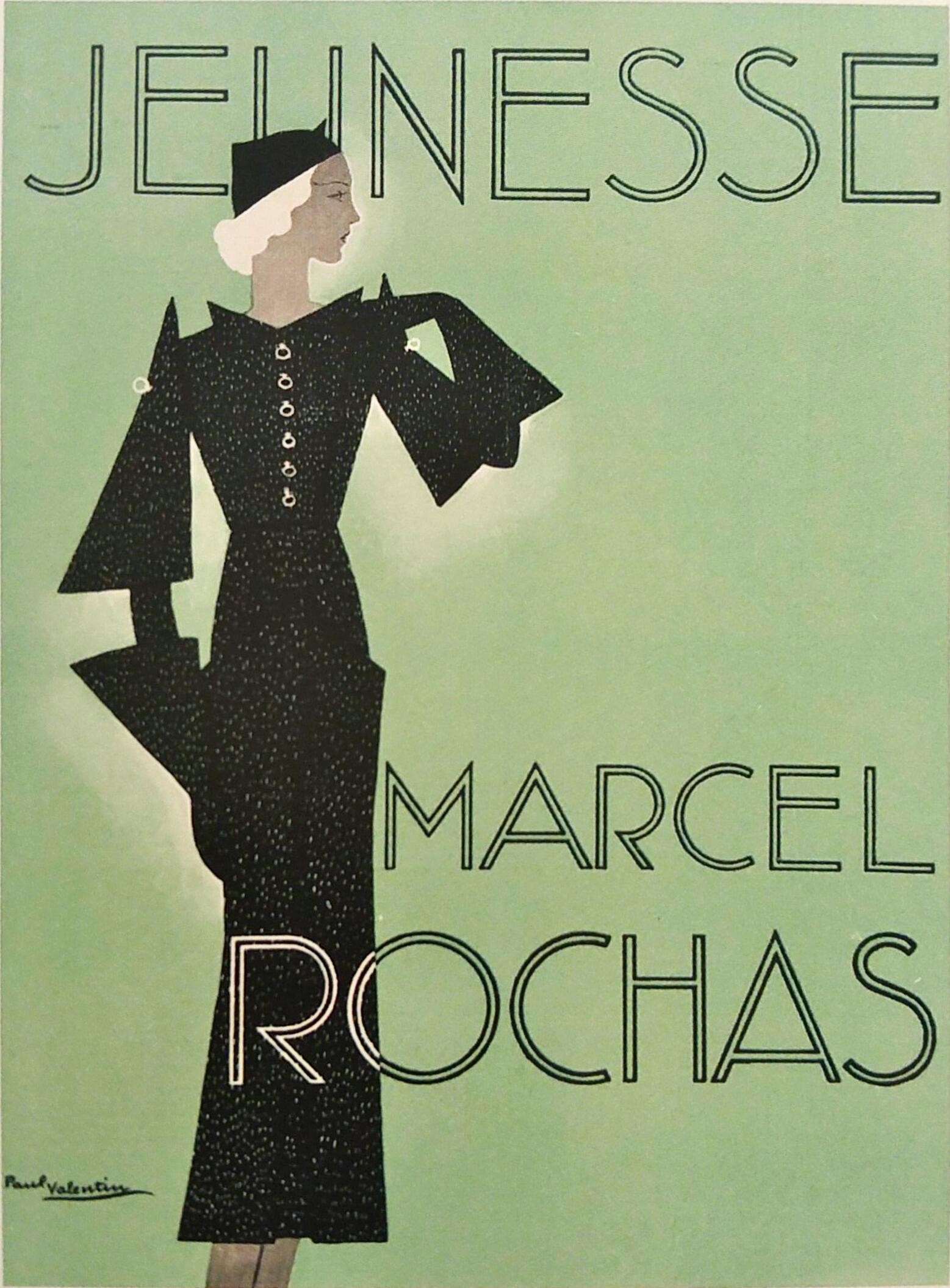 From muse to businesswoman, discover the fascinating life of Hélène Rochas.